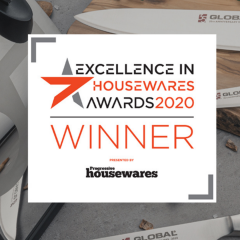 This year's Excellence in Housewares Awards, hosted by Progressive Housewares magazine brought together members of the housewares industry from across the globe in a virtual celebration. Members of the Global Knives and Grunwerg team attended the virtual event, and we are proud to announce that Global Knives were delighted to take home the Icon Award!

This year, Global Knives has been celebrating its 35th anniversary, with this award recognising the classic housewares products that have stood the test of time. Global has maintained its reputation for quality and unrivalled sharpness through its same exacting Japanese standards for 35 years.

Ben Grunwerg, Director of Grunwerg said: “We are absolutely delighted that Global Knives have won the icon award, which is fitting during the celebrations of the 35th anniversary of Global. We would like to thank everyone that was involved in putting these awards together and we would also like to pass on the thanks of our friends in Japan.”

As well as taking home the trophy for the Icon Award, Global Knives was also named as a finalist in the Cutting Edge Award category, celebrating excellence amongst UK retailers specialising in knives, scissors and cutting equipment.

Global’s signature 35th Anniversary 12-Piece Knife Set was nominated for the Cutting Edge Award and was described by Progressive Housewares Magazine as “The preferred choice for professional chefs and keen cooks alike”. The virtual awards production included an uplifting interview with author, tv presenter and winner of The Great British Bake Off Nadiya Hussain as well as a guest appearance from Great British Bake-Off judge and culinary expert Prue Leith.

A fantastic end to 2020 and wholeheartedly fully deserved!

If you would like to see the fantastic products that took away this remarkable award, head over to the Global Website.